Redwood Credit Union is in Santa Rosa, California, a relatively large town nestled in Scotts Valley just north of the San Francisco Bay. According to CellReception.com, the city has been rated by customers to be relatively weak in cell reception, with the carrier average rated at 2.1/5 stars and Verizon at the top with 2.8/5 stars. Redwood Credit Union contacted HiBoost because they needed a mobile solution to prevent missing business opportunities due to dropped calls and poor reception.

Before providing a solution, the first step was to assess the signal reception around the property and identify the nearby towers. During this assessment, it was noted that the Redwood Credit Union’s building was within two miles of five signal towers. After surveying the signal from the roof of the building, there was a decent cellular reception, between -65 and -80 dB. However, this was not the case indoors. Once inside, the signal dropped considerably. With T-Mobile averaging a dB of -91.7, AT&T averaging -99.6, Verizon -87.6, and Sprint at -71.9. The survey team found that there are large dead zones; one area even got as low as -107 with AT&T. After surveying the floor plan, our team designed a system that included omnidirectional antennas and amplifiers throughout the Redwood Credit Union building.

The Solution
HiBoost installed one outdoor donor antenna as the signal strength outdoors was strong enough to support a single antenna. To distribute the signal throughout the entire building, the HiBoost team installed powerful HiBoost Industrial 100K boosters and 17 indoor antennas on each floor of the building. The HiBoost Industrial 100K covers up to 100,000 square feet and has about 83 dB of gain, as confirmed by FCC testing. 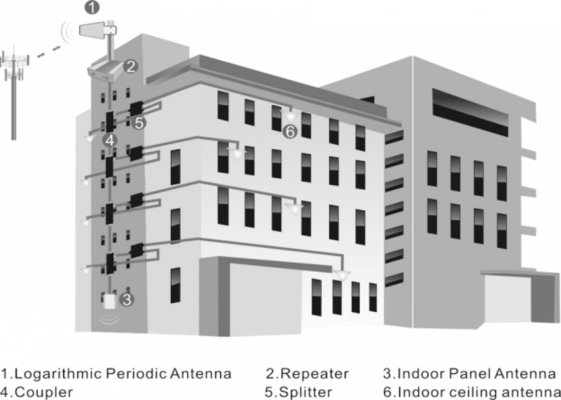 Results
As a result, there was a significant improvement in cellular service to Redwood Credit Union. Some areas of the building experienced a gain of up to 47 dB. Each carrier also experienced positive signal gains with Verizon increasing the most with a 44.5 dB increase followed closely by AT&T with a 43.9 increase, and T-Mobile and Sprint increased by 29.5 and 11.2. Now every single carrier was receiving excellent quality signal.

As mobile devices become more prevalent in our lives, we also become more dependent upon them. Not only do we need them to function in our personal lives, but they have an increasingly significant role in our businesses as well. In the Redwood Credit Union case, their lack of signal was impacting their bottom line. Thankfully, the location of their business was close to cell towers enabling them to boost their signal that was not readily available to others in the region. After a quick assessment, it was easy to set up a package to fix the areas that were lacking. Using an custom array of powerful Industrial 100K boosters and indoor antennas, the HiBoost team was able to take the outdoor signal and bypass the interference the building was creating. Not only did it entirely fix the dead zones experienced around the building, but it improved general signal strength and quality tremendously. Redwood Credit Union is now able to utilize their mobile networks to maximize their business potential properly.